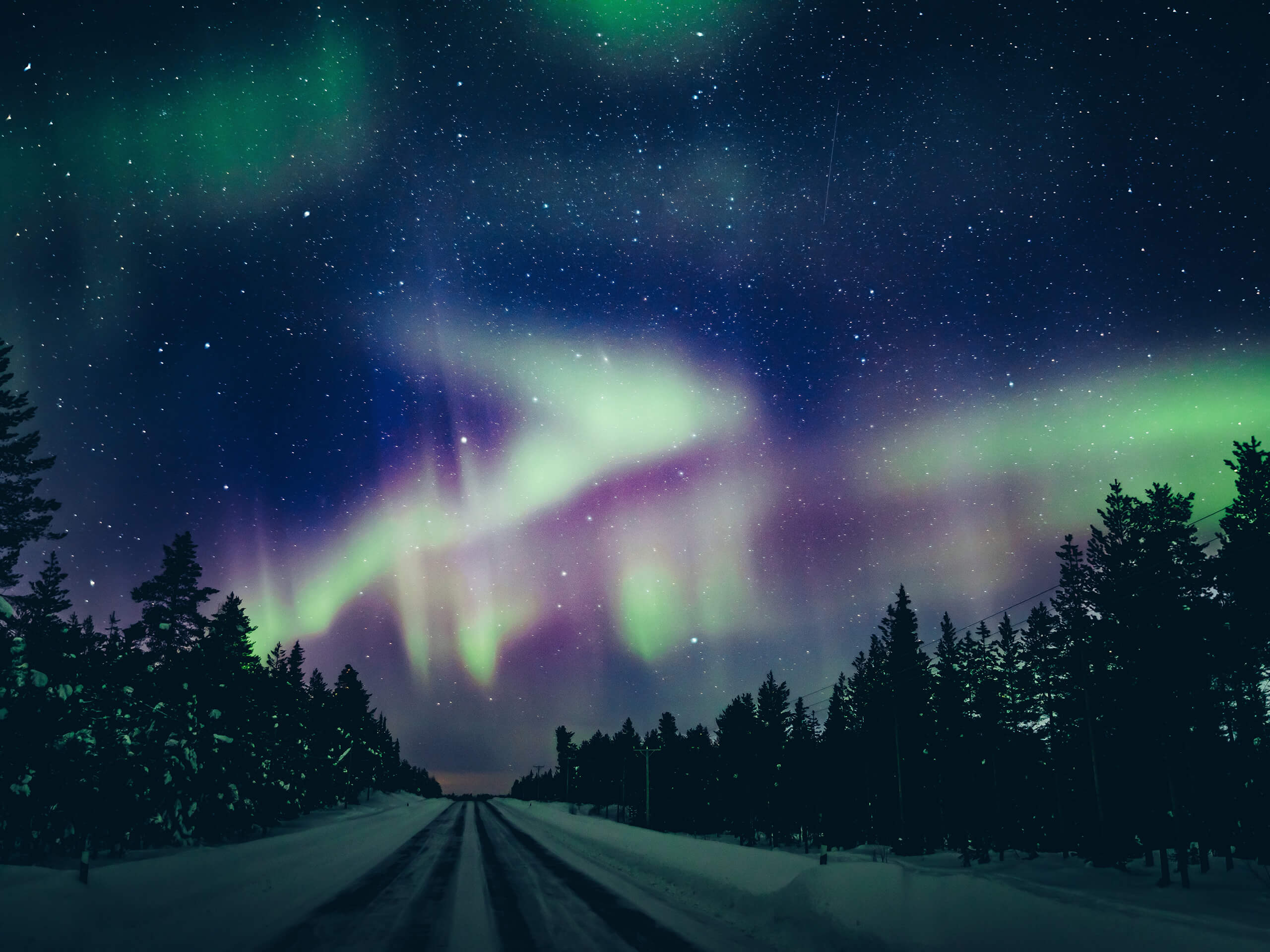 Posted at 20:10h in Thinking Thursday by The Insurance Center Alaska
0 Likes

While most Alaskans have been basking in the sun and enjoying the unreal temperatures this year, many of us in the industry have also been extremely nervous about the lack of rain and moisture this year has brought. We aren’t used to waking up to day after day of sunny warm days. It’s being driven by climate change and unusual weather patterns. As of this week, over 2 million acres of wilderness are on fire throughout Alaska. In this 3-minute article presented by The Conversation, Rick Thoman, a climate specialist at the International Arctic Research Center in Fairbanks, explains why Alaska is seeing so many large, intense fires this year and how the region’s fire season is changing. Alaska on fire: Thousands of lightening strikes and climate change put Alaska on pace for a historic fire season 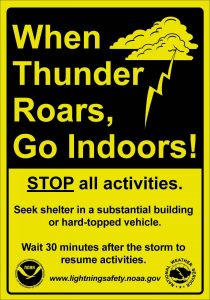 Many people in Alaska still don’t have access to any kind of internet service. This should be changing in the near future with remote and small broadband options that will be coming soon to villages and small towns all around Alaska with the creation of affordable broadband solutions, which will create learning and remote job opportunities that had never been an option. For all the details and how this is being rolled out, from Alaska Business Magazine, Broadband Ready: Bringing Internet Options to Rural Alaska 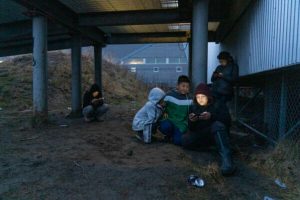 REGISTRATION IS COMING OUT IN THE NEXT FEW WEEKS-GET READY TO REGISTER FOR CLASSES AND RESERVE YOUR HOTEL ROOMS.

The Opening Cocktail Reception, sponsored by The Insurance Center, will be held on Tuesday evening 9/27/22

The theme for our party is..
SOLID GOLD
Come join us in beautiful Sitka!

We will also have Cyber CE Class at the convention, as well as some other great educational opportunities!

Wettest year in Australia leads to evacuations in Sydney, Australia

Because of the intense rain storms in Sydney, thousands of people have been forced to flee their homes as over 28 inches of rain (more than what falls in an average year in London) has fallen in the past week. This massive flooding has forced the government to release one-time cash payments to those who have been forced to evacuate, and of course, has caused chaos. From Reuters, Thousands more evacuate Sydney homes even as rain storms start to ease 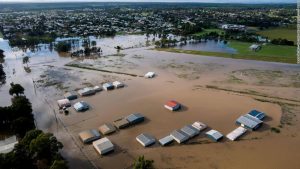 Growing up in Alaska, seeing lighting is rare. So there isn’t a lot of info out there for us locals on what to do there when it happens. Here is some info to keep you safe in the even of thunder and lightening storms from the NOAA.

Myth: A lightning victim is electrified. If you touch him, you’ll risk being electrocuted.
Fact: The human body does not store electricity, and lightning victims require immediate medical attention. It is perfectly safe to touch a lightning victim in order to give them first aid. Call 911 for help.

Myth: If it’s not raining or there aren’t any clouds overhead, you’re safe from lightning.
Fact: Lightning often strikes several miles from the center of a thunderstorm, far outside the rain or thunderstorm cloud. In fact, “bolts from the blue” can strike as far as 25 miles out from the parent thunderstorm. That’s why it’s important to seek shelter at the first indication of a thunderstorm and stay there until 30 minutes after the last clap of thunder.

Myth: The rubber soles of shoes or rubber tires on a car will protect you from a lightning strike.
Fact: Rubber-soled shoes and rubber tires provide NO protection from lightning, but most vehicles with metal tops and sides do provide adequate shelter from lightning because the charge travels through the metal frame and eventually into the ground. Just be sure to avoid contact with anything inside the vehicle that conducts electricity. Remember, convertibles, motorcycles, bicycles, open-shelled outdoor recreational vehicles and cars with fiberglass shells offer no protection from lightning.

Myth: “Heat Lightning” occurs after very hot summer days and poses no threat.
Fact: Many people incorrectly think that “heat lightning” is a specific type of lightning. Actually, it is just lightning from a thunderstorm that is too far away for any thunder to be heard (thunder is seldom heard beyond 10 miles under ideal conditions). If the storm approaches, the same lightning safety guidelines above should be followed.

Myth: Metal structures or metal on the body (jewelry, watches, etc.) attract lightning.
Fact: The presence of metal has no bearing on where lightning will strike. Mountains are made of rock but get struck by lightning many times a year. Rather, an object’s height, shape, and isolation are the dominant factors that affect its likelihood of being struck by lightning. While metal does not attract lightning, it obviously does conduct electricity, so stay away from metal fences, railings, bleachers, etc. during a thunderstorm.

Coming soon-ePay Policy is about to get even easier!

Coming in the next few weeks a Quote/SUB number will be needed to make a payment on our website. This will make it easier for you or your customer to find their account to make a payment. This will save time as they won’t have to fill in additional information-they will just type in their Quote/SUB number, select the corresponding account, and type in the amount of money they want to apply. It’s that easy! Once we go live in the next few weeks with this new upgrade we will let you know. If you have any questions, please feel free to email akorver@ticak.com 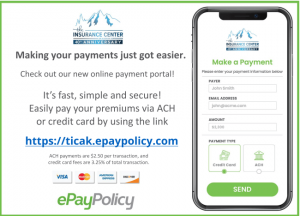 If you see your risk below, you can choose to send a $10 to the donation of your choice or receive a gift card to Starbucks. To claim your Reading Reward, email: akorver@ticak.com 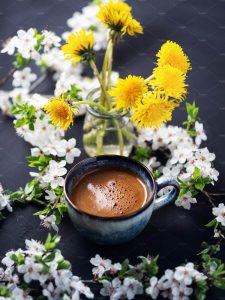 Why is Britain the wettest country? Because royalty has reigned here for years.

How does a thunderstorm catch fish? With a lightning rod!

When does it rain money? When there’s a change in the weather.

What is the opposite of a cold front? A warm back.

Why should you avoid tornado chasers? Because they’re always passing wind.

What did Mrs Claus say to Santa Claus when he asked what the weather forecast for Christmas Eve was? It look like rain, dear!

What is the worst type of weather to hire for a job? Lightning because it’s always on strike!

What do you have to do to win gold at the weather forecasting competition? You have to beat the raining champion!

What does a cloud wear under his raincoat? Thunderwear!

What did the tornado say to the sports car? Want to go for a spin?

What did one volcano say to the other volcano? I lava you.

What falls but never hits the ground? The temperature.

Why did the man only wear one boot into town? He heard there would be a 50% chance of snow!

What happens when it rains cats and dogs? You might step in a poodle!

How does the rain tie its shoes? With a rainbow.

What goes up when the rain comes down? An umbrella!

Why shouldn’t you start a fight with a cloud? He’ll storm out on you.

What did the hurricane say to the other hurricane? I have my eye on you.

What do you call a grizzly bear caught in the rain? A drizzly bear!